You will need to arrange round trip flights from your homeland to a town called Longyearbyen. 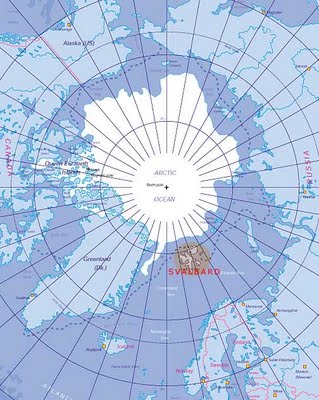 Longyearbyen is situated on Spitsbergen island (part of the archipelago of Svalbard) off the coast of Norway. Citizens of some countries may require a visa to visit Svalbard (the departure point for the Pole) or Norway, where most people transit for connecting flights.

Please be aware that delays can occur with polar travel and you should ideally have some flexibility with your ticket, e.g. the ability to change for a small fee or full flexibility.

The Svalbard Islands are located in the Arctic Ocean, halfway between Norway and the North Pole. Here you will find one of the world’s largest areas of untouched nature. The largest islands are Spitsbergen, Nordaustlandet, Barentøya, Edgeøya, and Prins Karls Forland. The archipelago is governed by Norway and regulated by the Svalbard Treaty. There are multiple settlements on Spitsbergen and Longyearbyen is the Norwegian administrative centre. There is no road connection between the settlements.

Svalbard, the realm of the polar bear, has long fascinated travelers. Unique wildlife, wild nature and old mining towns are all found on the islands. The name Svalbard means "cold coasts" and was first mentioned in Icelandic texts in the 12th century. On Svalbard you will find wild nature, old mines and polar bears. The islands are located between 74° ~ 81° N and 10° ~ 35° E. They cover 63,000 square kilometers. Nearly 65 per cent of the surface of Svalbard consists of protected areas, including three nature reserves, six national parks, 15 bird sanctuaries and one geo-topical protected area. Norway's largest glacier, Austfonna, is located on Svalbard. Austfonna is the world's third-largest icecap after Antarctic and Greenland, with a glacier front of 200 kilometers.

Longyearbyen has 2,040 inhabitants. This is the seat of local government and Norway’s main administrative centre on Svalbard. The small colorful community has developed from being a typical village town into a modern community with different kinds of businesses and industries, and with a wide range of cultural activities and opportunities.

Despite Svalbard being so close to the North Pole, the archipelago has a relatively mild climate compared to other areas at the same latitude. In Longyearbyen, the average temperature ranges from -14°C in winter to 6°C in summer. The lowest temperature was recorded in March 1986 at -46.3°C - the highest temperature was recorded in July 1979 at +21.3°C. In winter, Svalbard often has long periods with temperatures between -20°C and -30°C; add to that a wind-chill factor that seriously compounds the cooling effect of the low temperatures. In summer, fog is not uncommon. In terms of precipitation, Svalbard may be described as an "arctic desert" with annual rain- and snowfall at a mere 200 ~ 300 millimeters. The weather on Svalbard can shift very quickly and local variations are often considerable.

WHAT TO DO IN SVALBARD

Winter Activities
‍The winter season offers opportunities for combining for example longer skiing trips with snowmobile safaris or dog sledding. To ascend Svalbard’s highest peaks by the use of skis may be a dream for some, whilst others prefer to explore the winter wonderland by dog teams or snowmobiles. Many activities are only available during certain seasons. Dog sledding, snowmobile safaris and skiing are usually possible from December to late May. However, in some areas these activities may be offered in summer as well.

Other Activities
At the gallery in Longyearbyen you can see the Svalbard collection of old maps and books, a slide show from the photographer and composer Thomas Widerberg, and an exhibition of Kåre Tveter’s paintings. From time to time there are also sales exhibitions.

The Longyearbyen Church is open for visitors every day and there is a service nearly every Sunday. Every Tuesday evening, the church sells coffee and Norwegian waffles. Here you get to know Longyearbyen and the people better.

The cable trestles are cultural monuments over the manual driven coal mining in Longyearbyen. At that time, the coal was transported in "kibs" (carriers) on the cable way to the cleaning plant.

There is a selection of cafés, pubs and restaurants in Longyearbyen, the capital of Svalbard. Having your meal in a trapper's cabin is a special experience.

If you’re arriving early, or staying on for a few extra days, and you’re interested in the activities above, please see the following links:
‍http://www.spitsbergentravel.no/
‍http://www.svalbardbooking.com/

The following are links to information on the island and the archipelago of Svalbard.
History, geography, climate, politics, demographics and economy: http://en.wikipedia.org/wiki/Svalbard
‍Tours, attractions, shops, wildlife etc: http://www.svalbard.net/