How many North Pole Marathon races have occurred?

The 2022 event will be the 17th edition of the North Pole Marathon. The first North Pole Marathon occurred in 2002 when race director Richard Donovan covered the distance alone. The race is now a prominent fixture on the international marathon calendar and approximately 550 people from over 50 nations have successfully completed it. *Please note that there were no expeditions to the North Pole in 2019 and the COVID-19 pandemic prevented the North Pole Marathon from occurring in April 2020 and again in 2021. We look forward to the race resuming as an annual competition in 2022.

I have no prior extreme weather experience. Is it ok for me to run at the North Pole?

Yes. Proper clothing should ensure the cold is not an overwhelming problem when running or walking this race. A large heated tent is also available every 4 km to 5 km. Most participants will never have encountered extremely cold conditions before traveling to the Pole.

With little or no marathon experience, should I be able to finish the FWD North Pole Marathon?

Yes. If you train properly and can run or walk a distance of 26.2 miles comfortably, then you should be able to complete the FWD North Pole Marathon successfully. Some of the previous participants had never completed a marathon before: determination is the key ingredients to finishing. However, it is important to keep warm and maintain a good body temperature. One of the priorities of the organizer is to have everybody finish the race and there is generally no cut-off time of major significance. 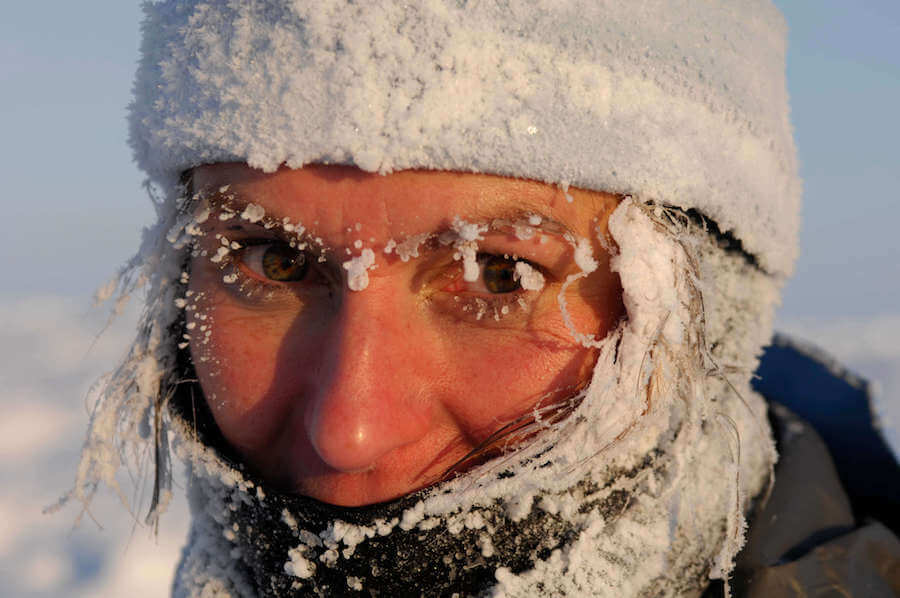 Can I raise money for charity?

Yes. It is a great idea to use your participation to raise funds for a charity or cause that you feel passionate about. Previous entrants have raised millions of euro for charity.

Is it ok to have a sponsor?

Yes. You can bring a sponsoring company's logo or product to the exact North Pole to have it photographed. The race is broadcast extensively each year and you can wear sponsor logos on your headgear, and the sides of your arms and legs during the event (the official race number is placed on the front of your torso).

How will I get to the North Pole?

You will arrange round trip flights from your homeland to a town called Longyearbyen, which is situated on Spitsbergen island (part of the Svalbard archipelago) off the coast of Norway. There are daily flights from Oslo to Spitsbergen. From there, you will be flown to the North Pole via specialist aircraft. Please see the Race Travel section for details.

Do I need a visa for the North Pole?

Is there any land at the North Pole?

No. The North Pole is not situated on land, but on the Arctic Ocean. Athletes will therefore be running 'on' water, frozen water! You will be running on an ice sheet some 6 - 12 feet thick above 12,000 feet of Arctic Ocean on the top of the world.

What date will the race take place?

This next marathon is provisionally scheduled for 13th April 2022. Competitors will leave Svalbard on 12th April and return to Svalbard 14th April, therefore spending about 36-48 hours in the polar region if there are no delays.

Can I be guranteed to be in and out of the North Pole as scheduled?

Absolutely not. Although the races are often operated in a very timely fashion, you are going to one of the most difficult places to fly to in the world. There could be many days of delay and you should not plan anything important for a minimum of one week after your expected return. Allow yourself time to enjoy this unique experience without the stress of time pressures. Of course, every effort will be made to keep to the scheduled departure and return date, but all flights are subject to weather, aircraft serviceability, bureaucracy and local conditions.

Where exactly will the race take place?

The race will be run from a drifting North Pole camp called Barneo, which floats about the North Pole between 89N and 90N. There will be a circular route of 4.2 km, if possible, which must be repeated ten times. Leads (breaks in the ice) and safety criteria will ultimately determine the maximum length of the circuit. The finish will occur at the ceremonial Pole where all the lines of longitude symbolically meet. 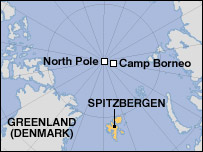 Will it be safe to run?

The race is a contained one in that it is run on a circuit. Flags will guide athletes around the course and participants should be visible at all times. Moreover, there should not be a discernibly greater risk from the activity of running vis-a-vis doing any other activities at the Pole or being in the general location.

Will the circuit be a perfect circle?

No. The circuit will meander among hillocks of ice and incorporate part of the aircraft landing runway. The map depicts the shape of the 2007 North Pole Marathon course, which was a loop of 4.2km. Competitors repeated this loop ten times to finish the marathon distance. 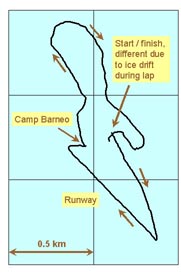 Will the course be moving during the race?

The entire course will move with the direction of the Ocean current during the race. Competitors will not feel this movement happening, but it does! Athletes should simply feel like they are running on land at the exact same longitude and latitude coordinates where they began. The diagram depicts the map readings of a competitor's GPS watch for each of the ten laps of the 2007 race. One can see that the entire course was moving as a block during the 5+ hours it took him to complete the race distance. 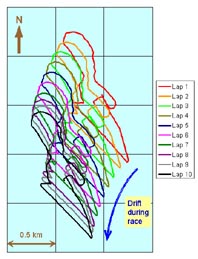 Will I get to stand at the exact Geographic North Pole?

Yes. Assuming we are not by some remote chance floating over 90N when all have finished the race, we will travel by Mi-8 chopper to the exact Geographic North Pole (90N). Remember that we are floating on the Arctic Ocean and within minutes we will have moved away from the exact North Pole!

Will there be a threat from polar bears?

It is unusual for a polar bear to travel that far north, though the camp operators keep weapons for safety reasons and to scare them away. To date, no marathoner has seen a polar bear on the trip but they have appeared at the camp on other days.

What are the underfoot conditions at the Pole?

The terrain will be uneven, incorporating both reasonably solid ice and loose snow. The snow should not be deep, but it will nevertheless be energy sapping and there can be occasional deep patches.

What shoes should I wear when running?

A pair of trail running shoes will work best. Snowshoes are not allowed as they cut the lining of tents used for refreshments and accommodation.

What clothes should I wear when running?

Will medical personnel be present?

Yes, a Russian medical doctor with expertise in cold weather injuries is always present at the Camp. In addition, a western trained doctor will be brought with the marathon group.

Will there be media coverage of the race?

What is the North Pole Marathon Grand Slam Club? 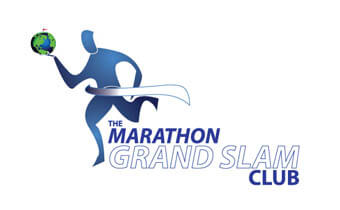 Does the North Pole Marathon have a positive environmental ethos?

Yes. The North Pole Marathon likes to use its race location on the polar ice cap in a positive environmental way. Indeed, many of the participants utilize the event to spread climate change messages to a large global audience. The event is is a foot race and naturally promotes fitness and exercise as a substitute to car and vehicle use. Furthermore, there is a carbon offsetting policy employed for the polar flights via investment in forestry projects in the Brazilian Amazon. It should also be highlighted, to avoid misconceptions, that the emissions resulting from a 2½ hour return flight to the Pole are identical to those of a similar flight elsewhere in the world. Moreover, climate change is a global phenomenon and we also encourage others to offset their carbon emissions. 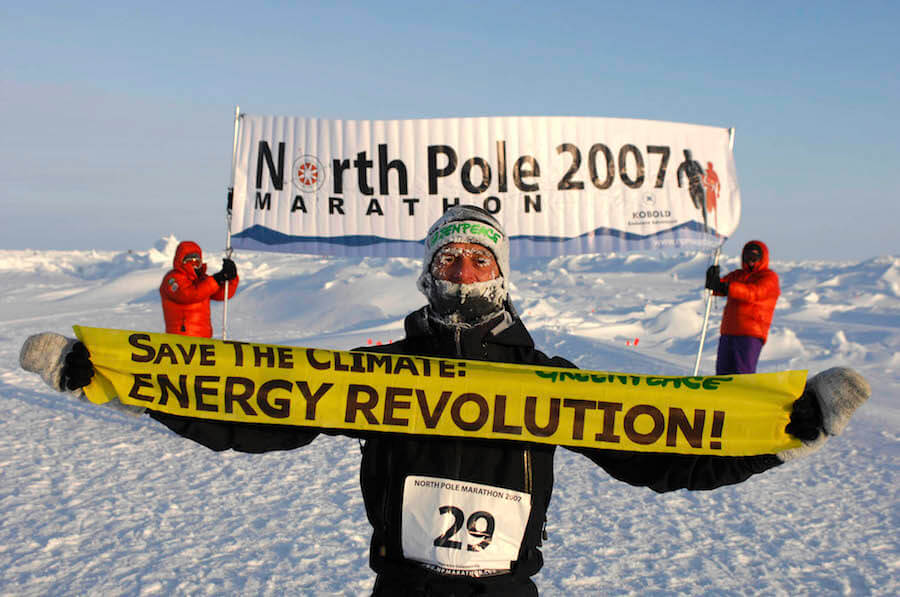